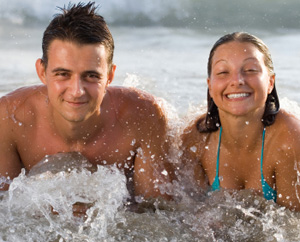 Green tea nutrients can make their way into our skin, and may protect against sun damage. For the fairest among us, sunburns are more than a painful nuisance; they cause skin damage, promoting premature aging and increasing skin cancer risk. The most common steps to reduce those risks include regular use of sunscreen and staying in the shade when the sun is strongest. Now we may be able to add tea time—specifically green tea time—to our sun-care routine.

Quell the flames with green tea

Researchers invited 16 people into a study examining whether green tea nutrients—called catechins—are absorbed by the body and into the skin, and if these nutrients protect against sun damage. The study participants had type I or II skin on the Fitzpatrick phototyping scale. A person with type I skin is characterized as burning easily and never tanning, while type II skin burns easily and tans minimally, with difficulty.

Fourteen participants completed the study, during which they took a daily supplement providing 540 mg of green tea catechins and 50 mg of vitamin C for 12 weeks. A portion of each person’s skin was exposed to UV radiation sufficient to cause a sunburn at the beginning of the study, before supplementation, and again, after 12 weeks. Tissue samples of both UV-exposed skin and unexposed skin were collected.

A couple of cups per day

This study suggests that green tea nutrients can make their way into our skin, and may protect against sun damage. The study was small, it did not assess sunburn directly, and it only tells us that inflammation, which is one marker of damage, can be lessened by green tea catechins. Still, these findings agree with other research on the sun protective effects of green tea, and there are few downsides to and other potential health benefits from drinking green tea.

According to John Weisburger, PhD, a tea researcher at the Institute for Cancer Prevention in Valhalla, New York, green tea has up to ten times the polyphenols—the family of nutrients to which catechins belong—compared with many vegetables and fruit. Our tips will have you brewing in no time:

*These statements have not been evaluated by the Food and Drug Administration.
These products are not intended to diagnose, treat, cure, or prevent any disease.

* These statements have not been evaluated by the Food and Drug Administration. These products are not intended to diagnose, treat, cure or prevent any disease.

Type and press Enter to search